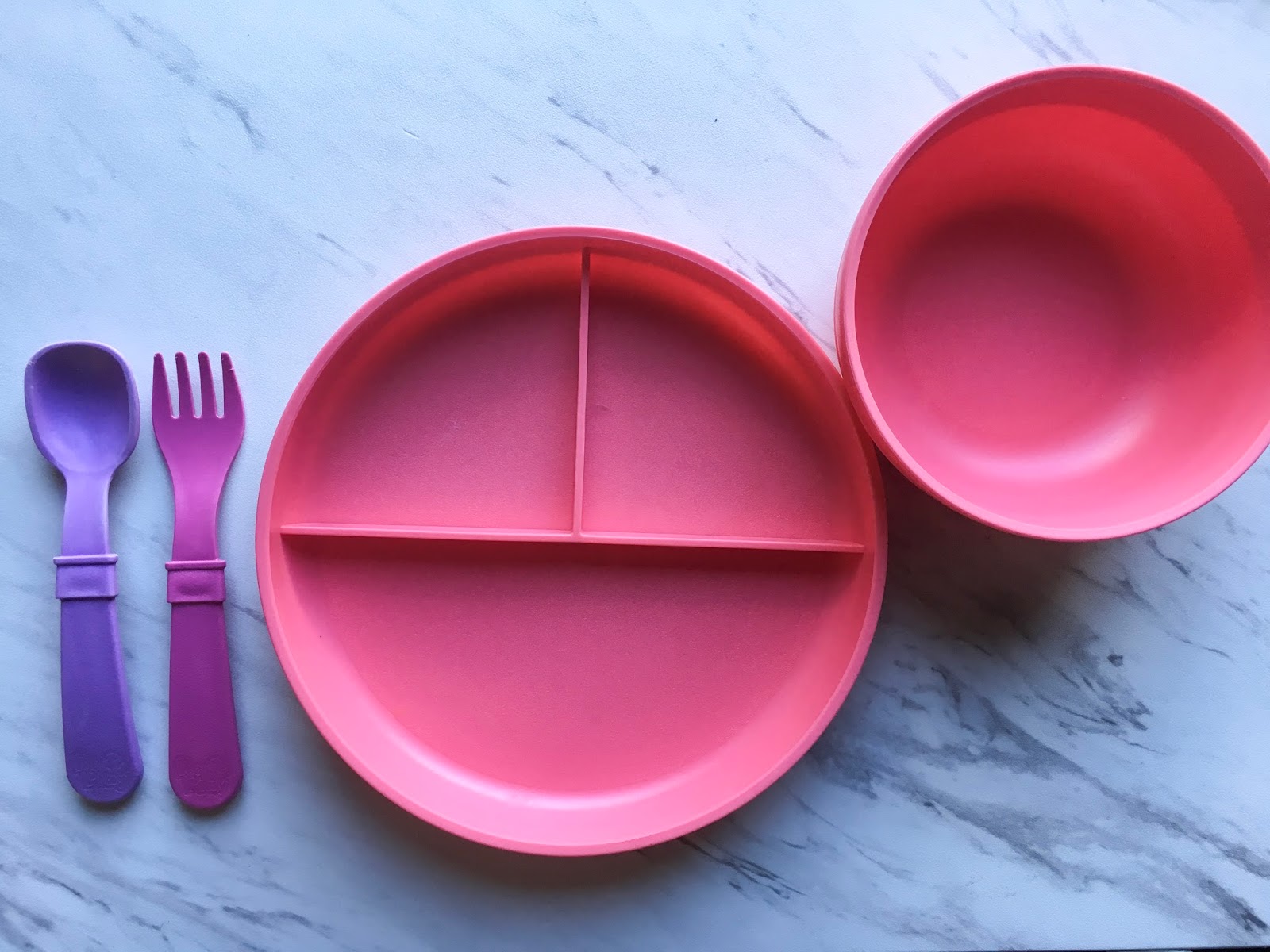 Hey, Mamas! I have finally rounded up a few weeks worth of meals that Noelia eats. We often repeat meals for her, so that is why it took so long to get a good variety to show you all what she eats!

It is funny how I mentioned in Noelia’s 21 month post that she has become an amazing eater (which she has!) but we are now in the “ehhh I would rather not eat, Mom” stage. UGH! We can never win, can we?! I hope you guys enjoy this post — I love discussing food and how I like to incorporate nutrition into our little one’s meals. Enjoy! 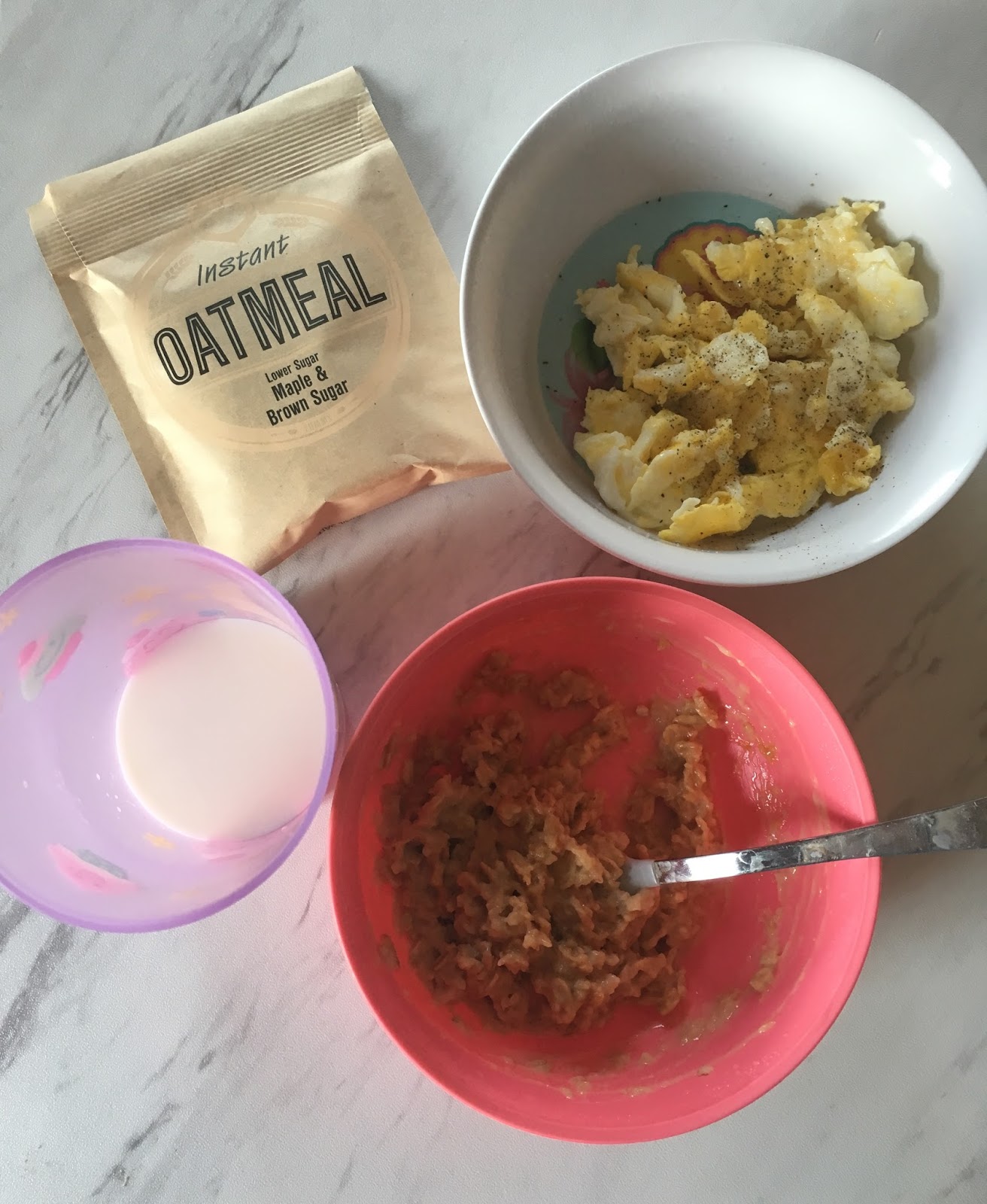 Noelia is not a milk drinker whatsoever. We try and try and try and its just nothing like Mama’s milk 😉 so we try our best to incorporate it in meals as much as we can (like mixing it with the oatmeal) and getting her dairy in other ways. She rarely drinks her milk when I give it to her but I always try anyways. We have even tried organic chocolate milk and she still isn’t a fan of that. Any other Mamas have a babe who dislikes milk?

With most of Noelia’s meals, we usually give her ice water or diluted juice. We rarely give her just juice, it is either filled with ice or half water half juice. She LOVES apple juice and we always buy the low sugar kind from Mott’s. Noelia also loves orange juice from time to time but orange juice is something I like to stay away from—it is usually loaded with sugar (carbs) and she will get filled up on it and will not eat too much else. I would rather have her fill up on good proteins and some good carbs rather than all carbs. Make sense?


TIP: We always give Noelia her proteins and smaller carbs options first before her main carbed foods. Every time I give all her food for her at once she will never touch her proteins or veggies. Funny how that works…but I can’t complain because I am the same way! So if your babe is the same way, try holding out their carb or “fun” foods until the end when they have eaten their protein source. I use it as bribery to get her to eat what is in front of her first. 😉 It doesn’t always work, but most the time she knows she can’t have her noodles or puffs, etc. yet. 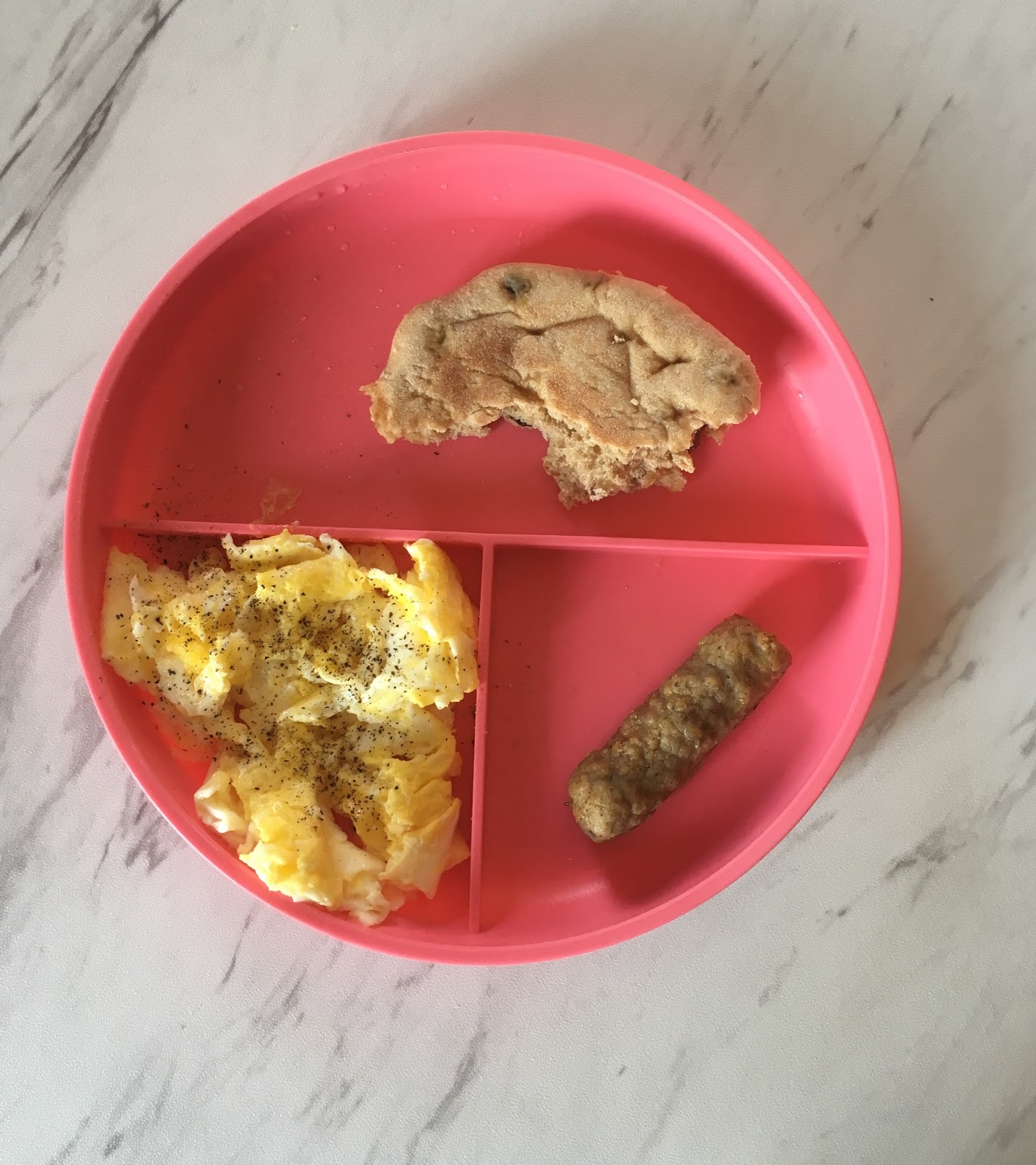 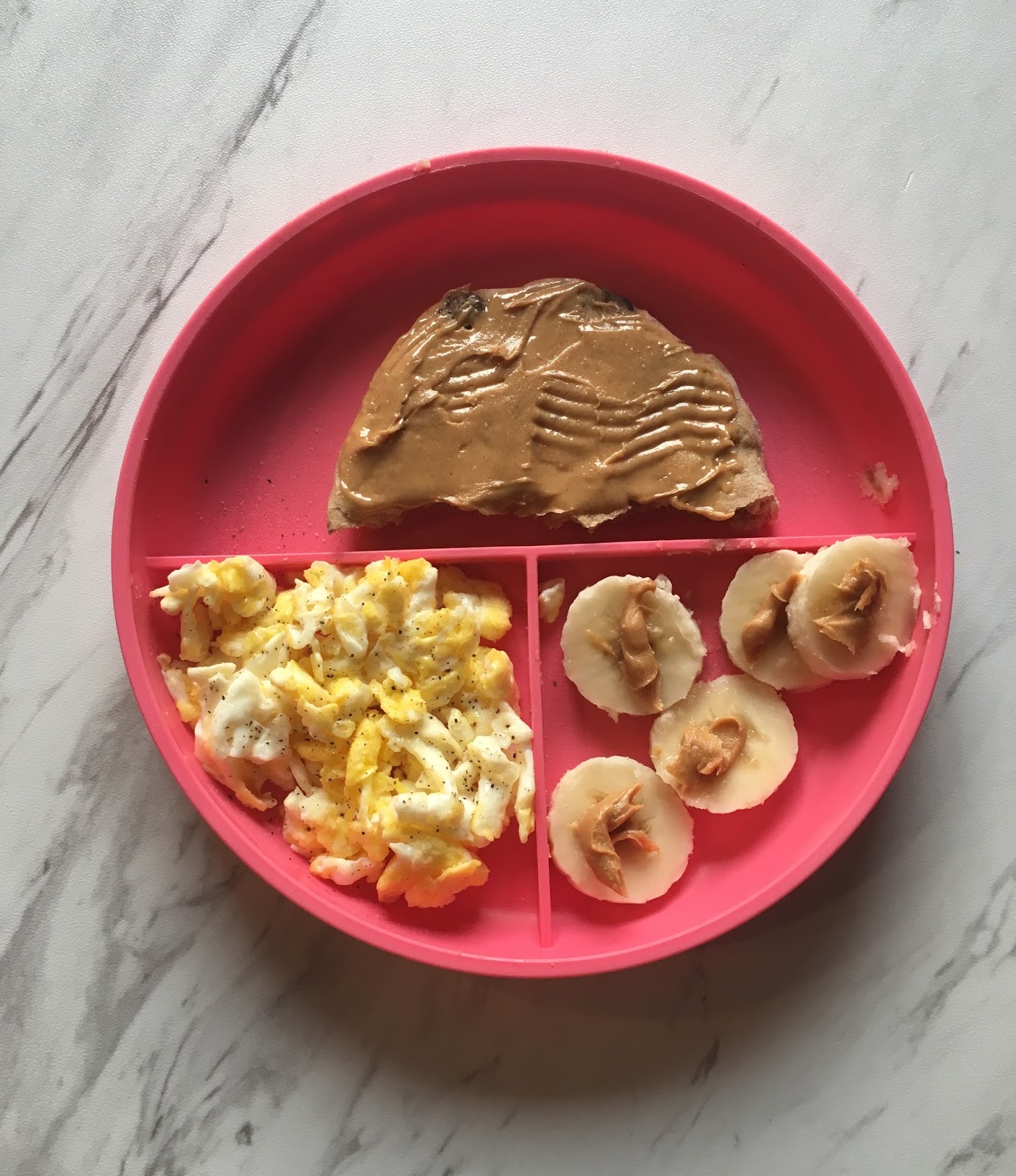 Can you guys tell yet that Noelia loves peanut butter? 🙂

Some Sundays when we have time before church we do more “fun” breakfasts. I will buy a low fat Pillsbury cinnamon roll tube and pop those in the oven. I will usually give her egg whites that day with her roll but it is funny how her eggs usually don’t get eaten those days 😉 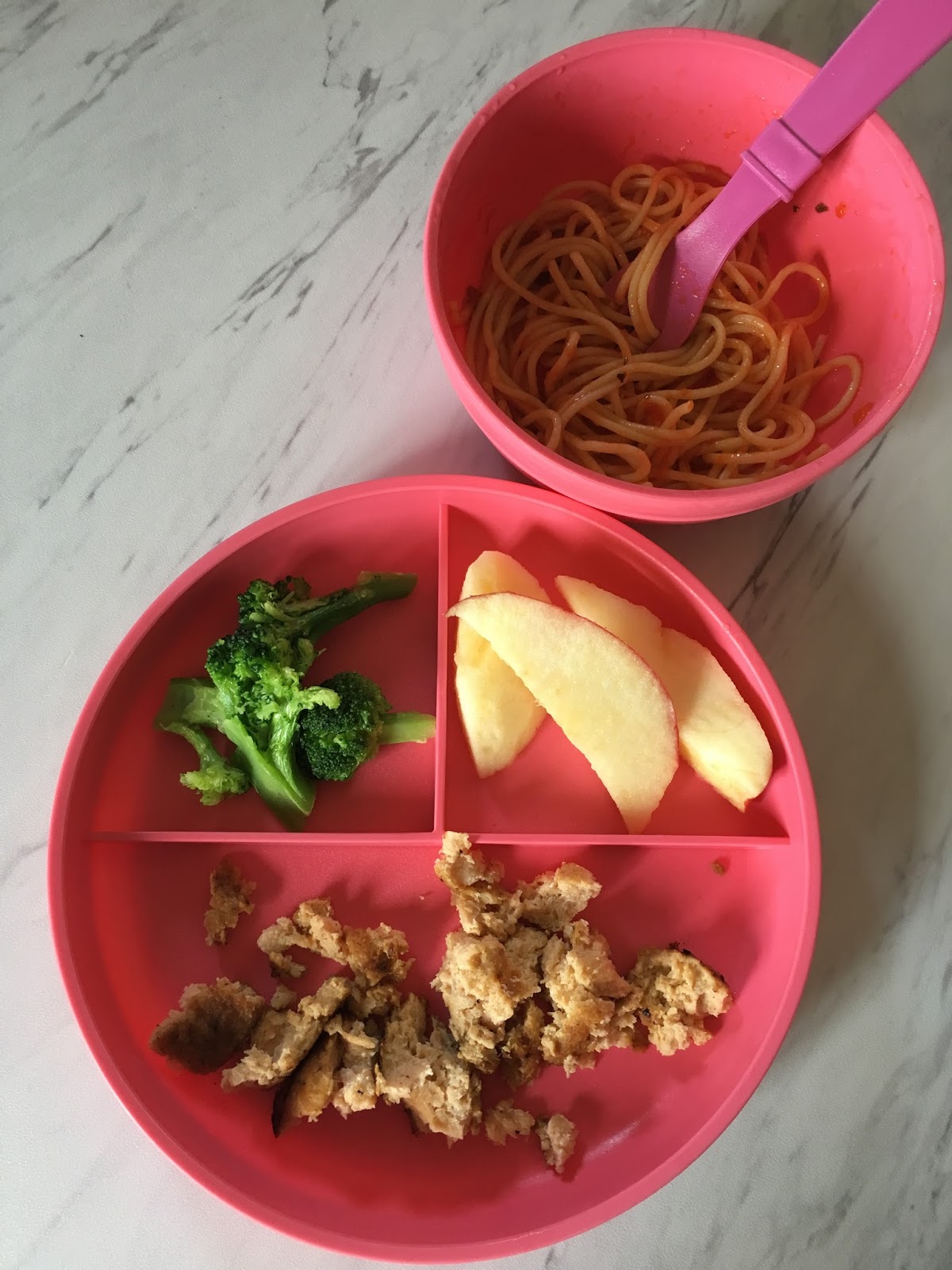 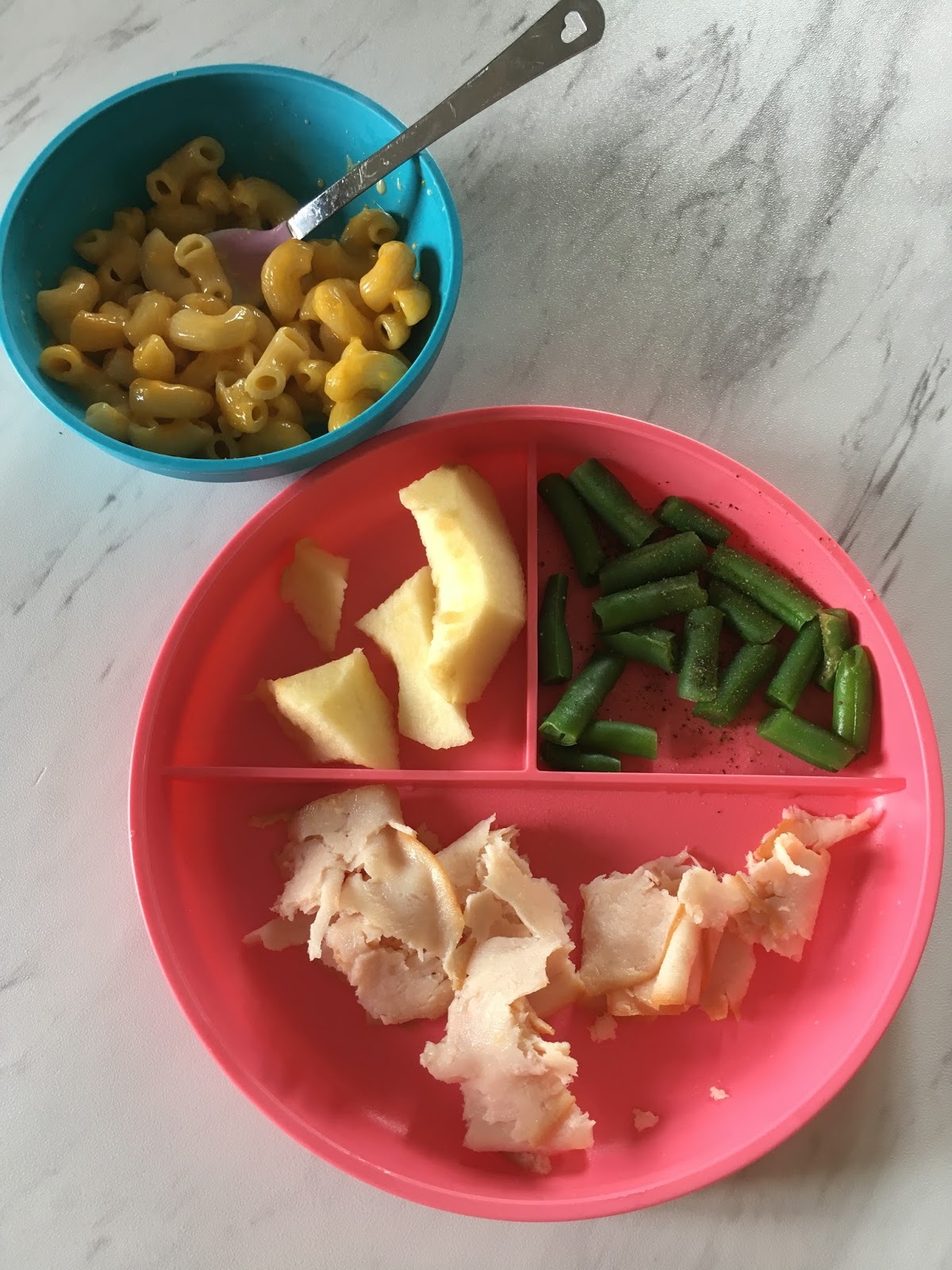 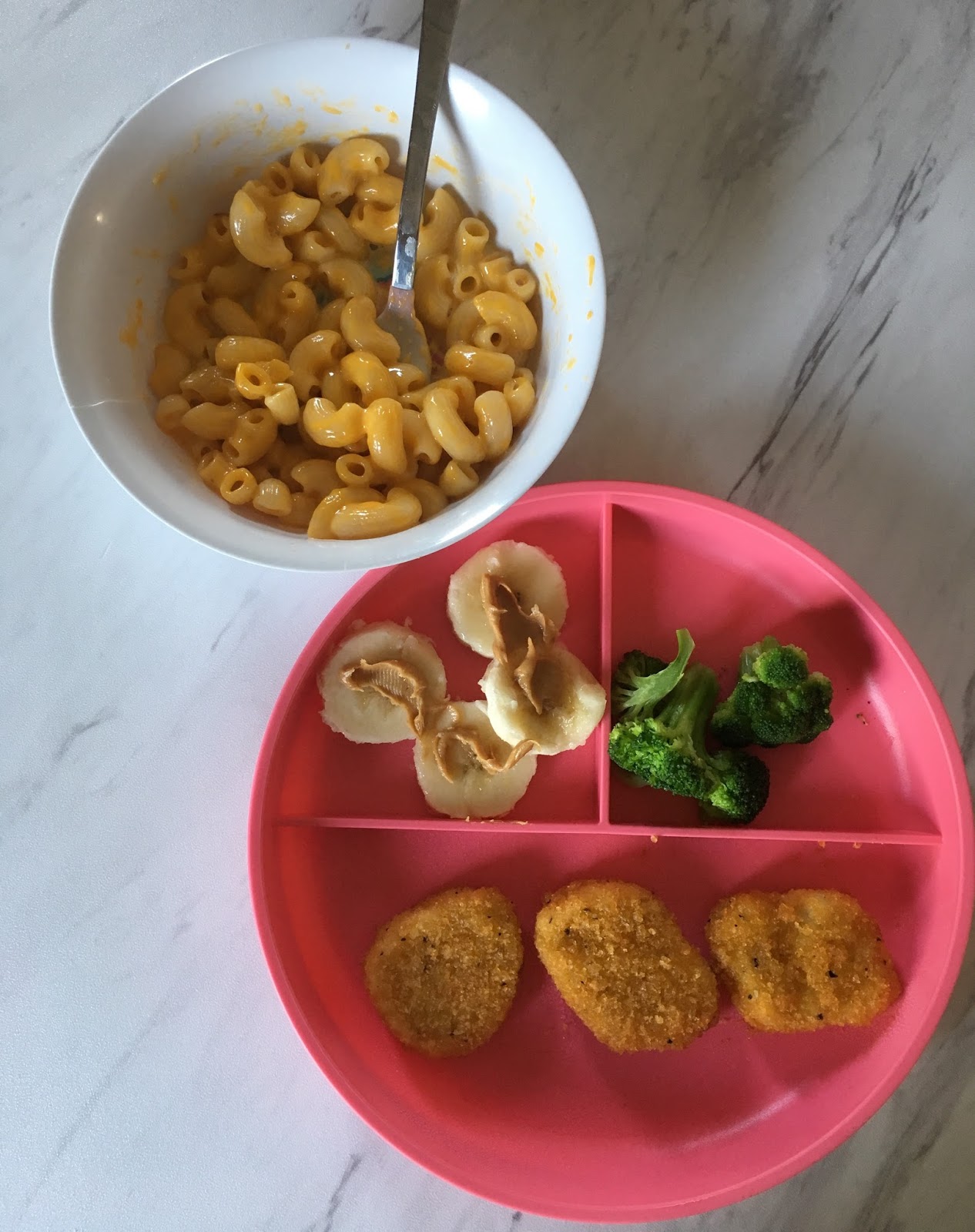 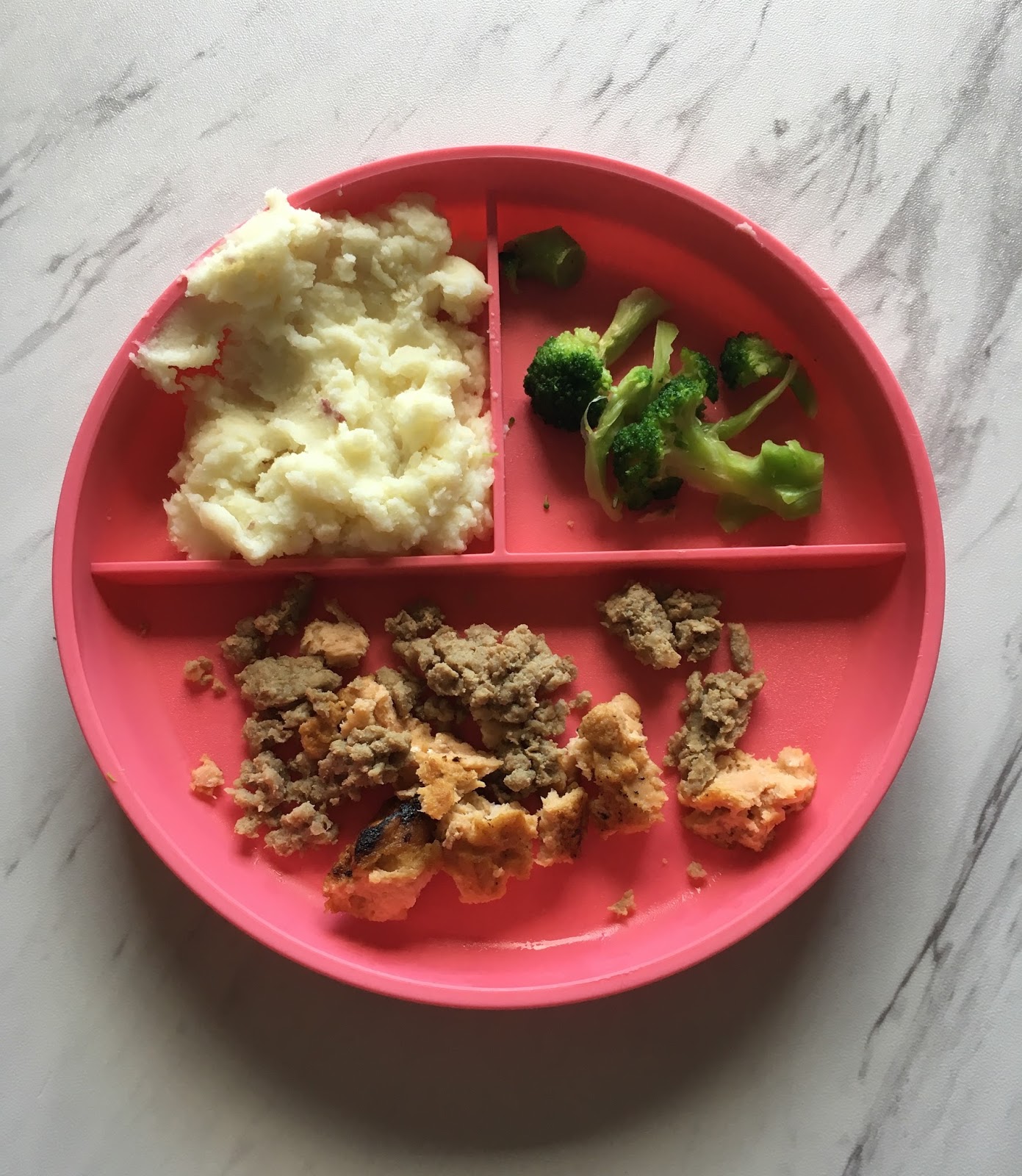 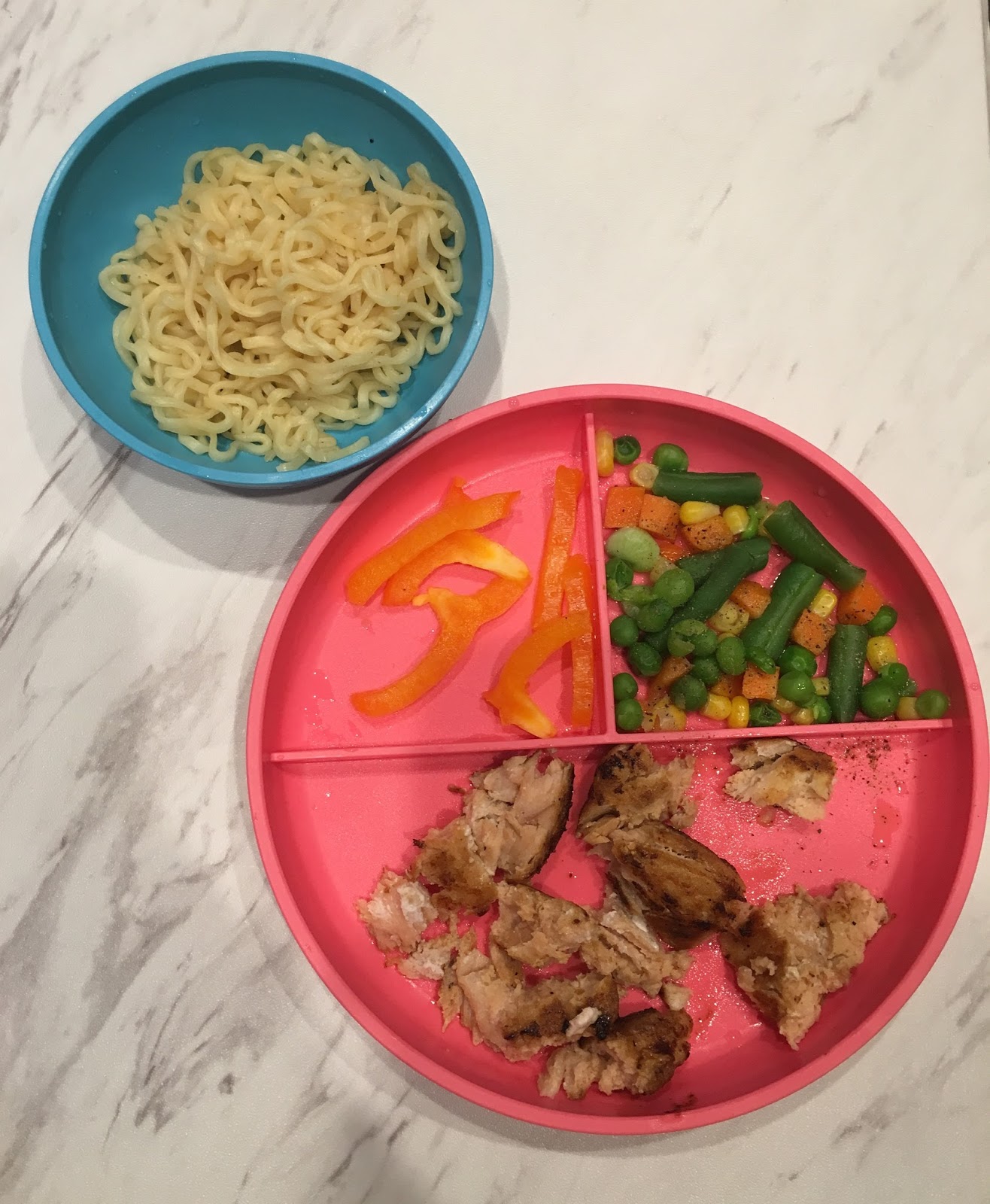 Some of you are probably like, “you feed your daughter ramen?!” Yes I do, and she loves it! We drain all the broth and just give her the noodles which is just carbs and some fat. There is nothing wrong with carbs! Sometimes, foods get a bad rap. If ramen is something someone is solely eating and over eating, than yes, it can be bad! But using it just for a carb source for one meal is not bad at all. It is no different than feeding her spaghetti noodles or any other type of pasta other than it being a little higher in fat. We believe in variety and showing her new, “fun” foods. We have done homemade pizzas, fries etc and I truly believe it is why Noelia has become such a good eater (mossssst of the time!).  We do not feed her ramen often, but when we do this girl goes to TOWN.

Post to come on why carbs get such a bad rap. 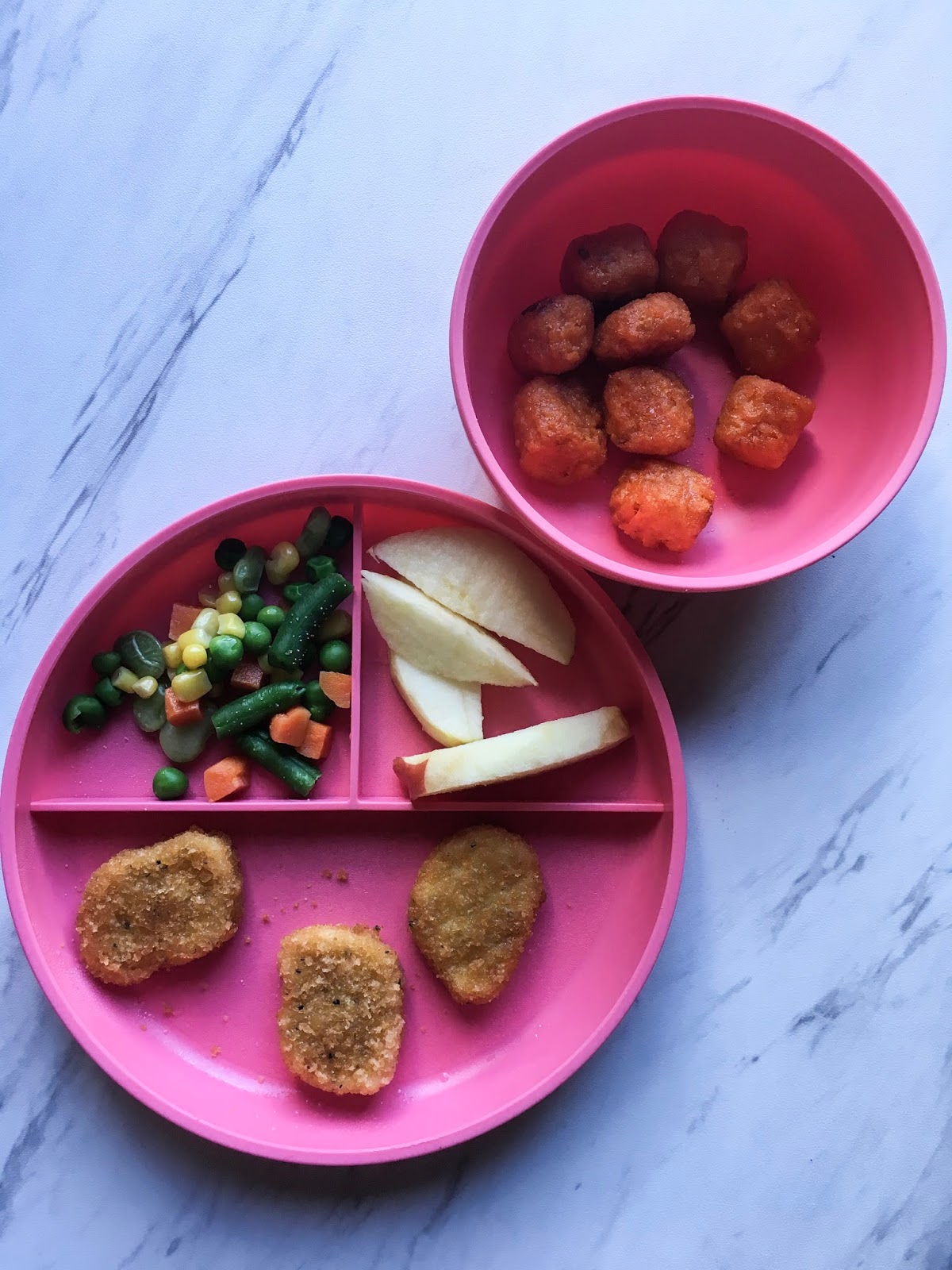 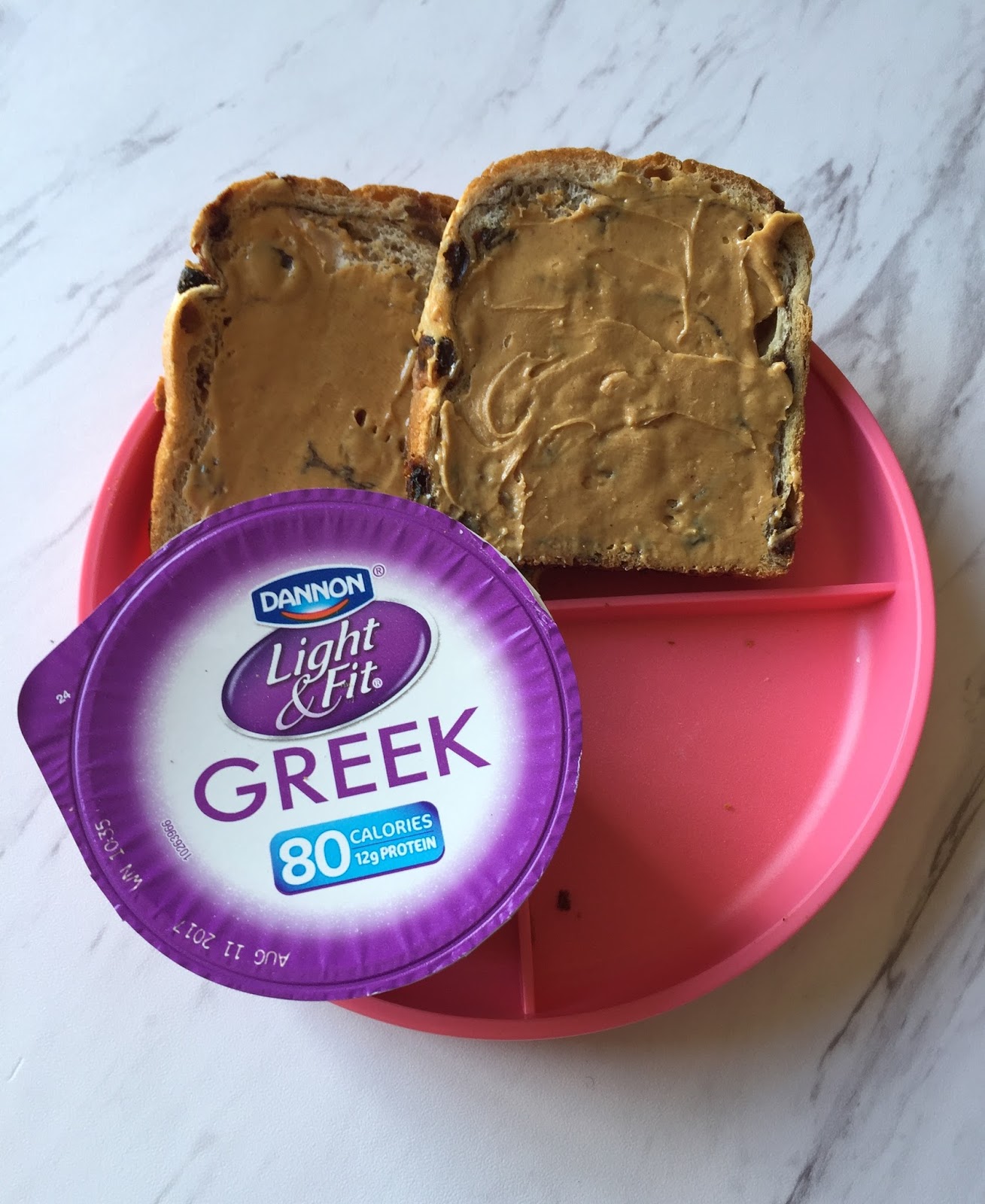 TIP: Be CAREFUL with yogurts. There are so many “kids” yogurts out there that are loaded with sugar. Sugar is not necessarily bad for you (yes, I said it), sugar is a carb, but when we are relying on a yogurt for our children’s meals I do not agree with it. Keep in mind, I am talking about 20-30 grams of sugar which is just too much for a toddler in one sitting. I like to go with a greek yogurt, which still has some sugar in it, but not nearly as much. Trust me, next time you grocery shop look at the nutrition labels of popular kids yogurts–it makes me sick! ALSO we use yogurt as a protein source. In most greek yogurts it is around 12-15 grams which is perfect, even when she doesn’t eat it all. She really doesn’t need that much in one sitting, but for someone who struggles with drinking milk it makes me feel better that she will at least eat 3/4 of one of these. If you are serving yogurt as a carb source, than other yogurts are just fine! I am talking about when using it as a protein source that we need to be careful. 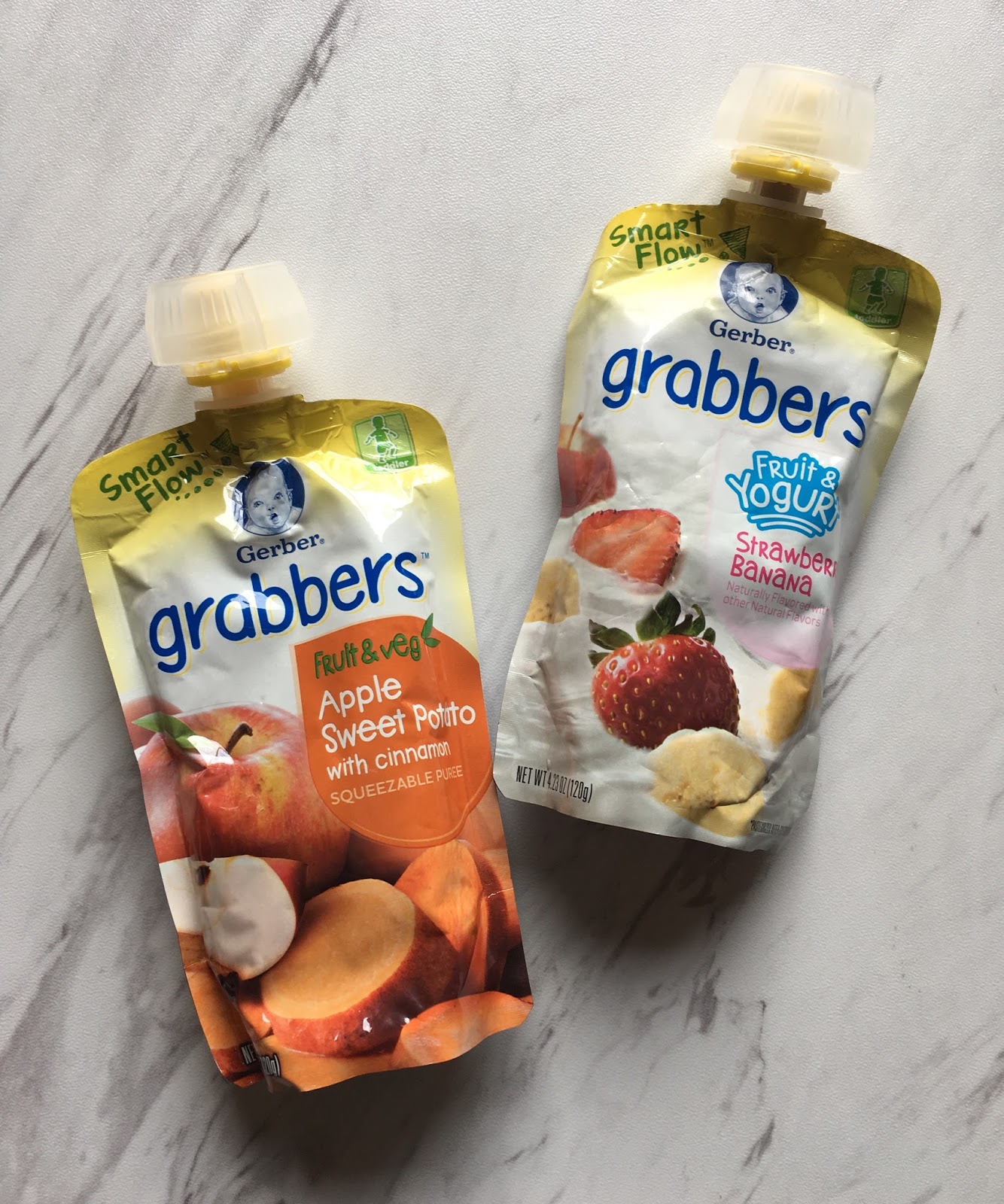 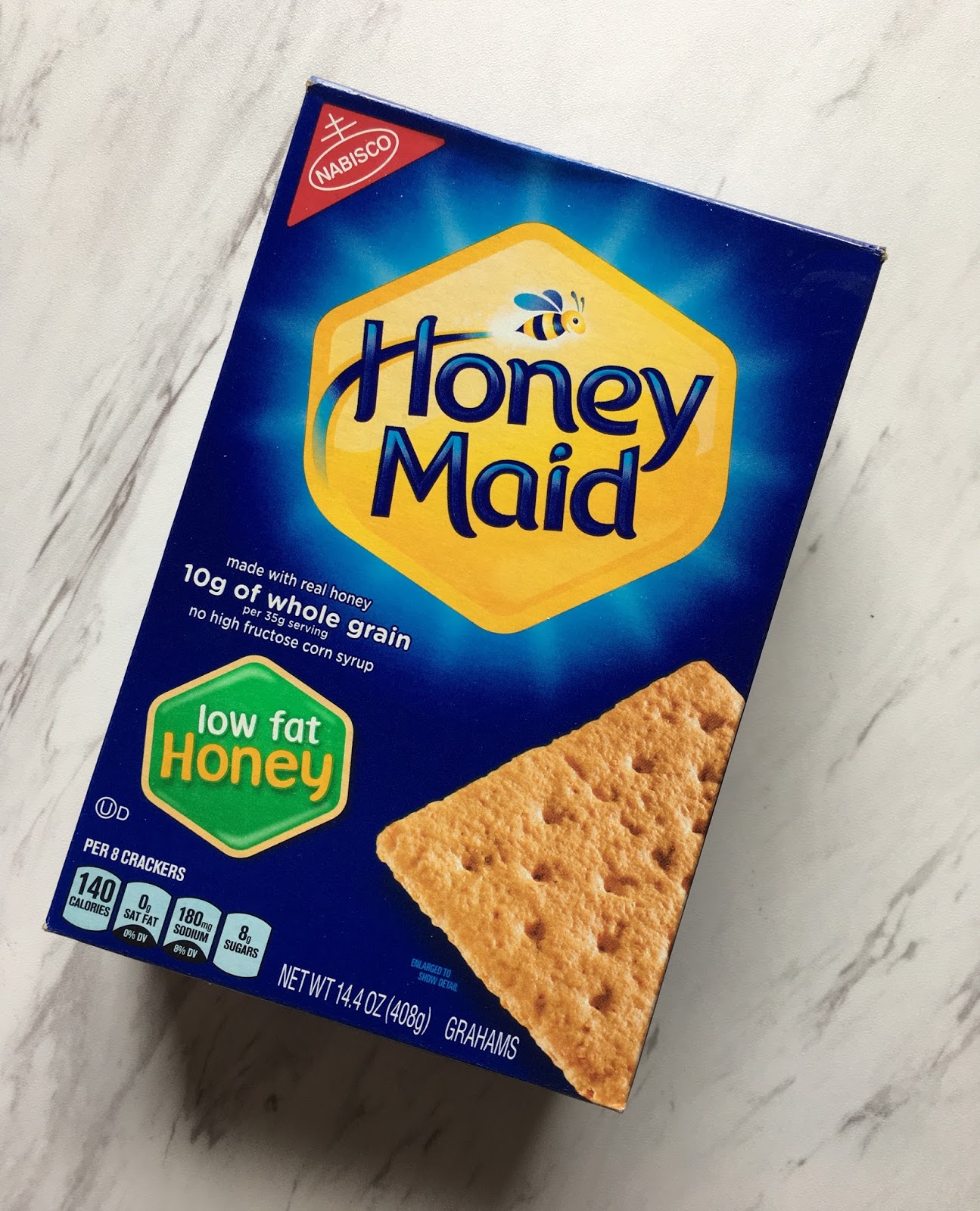 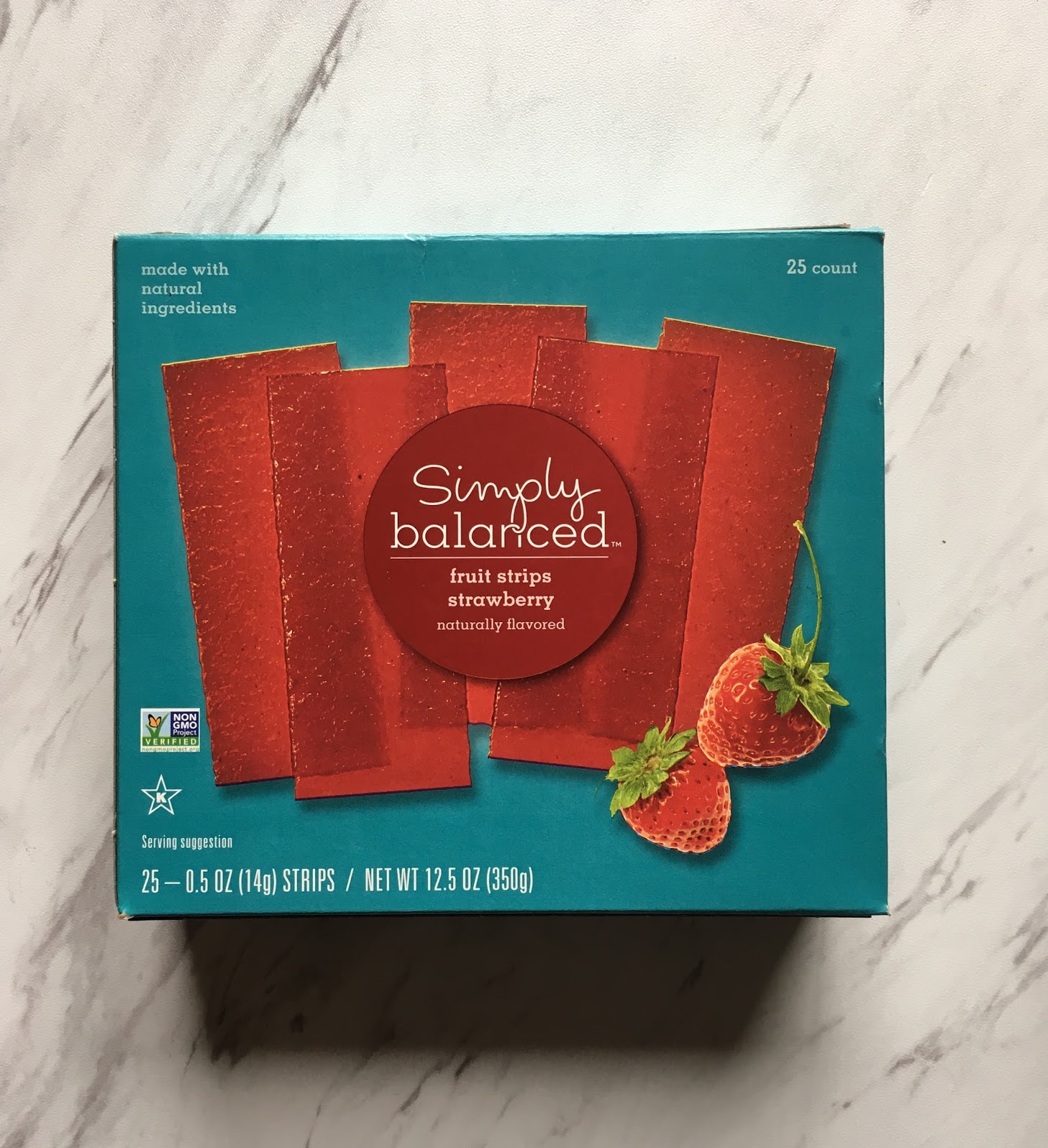 The Thomas Cinnamon Raisin bread we use 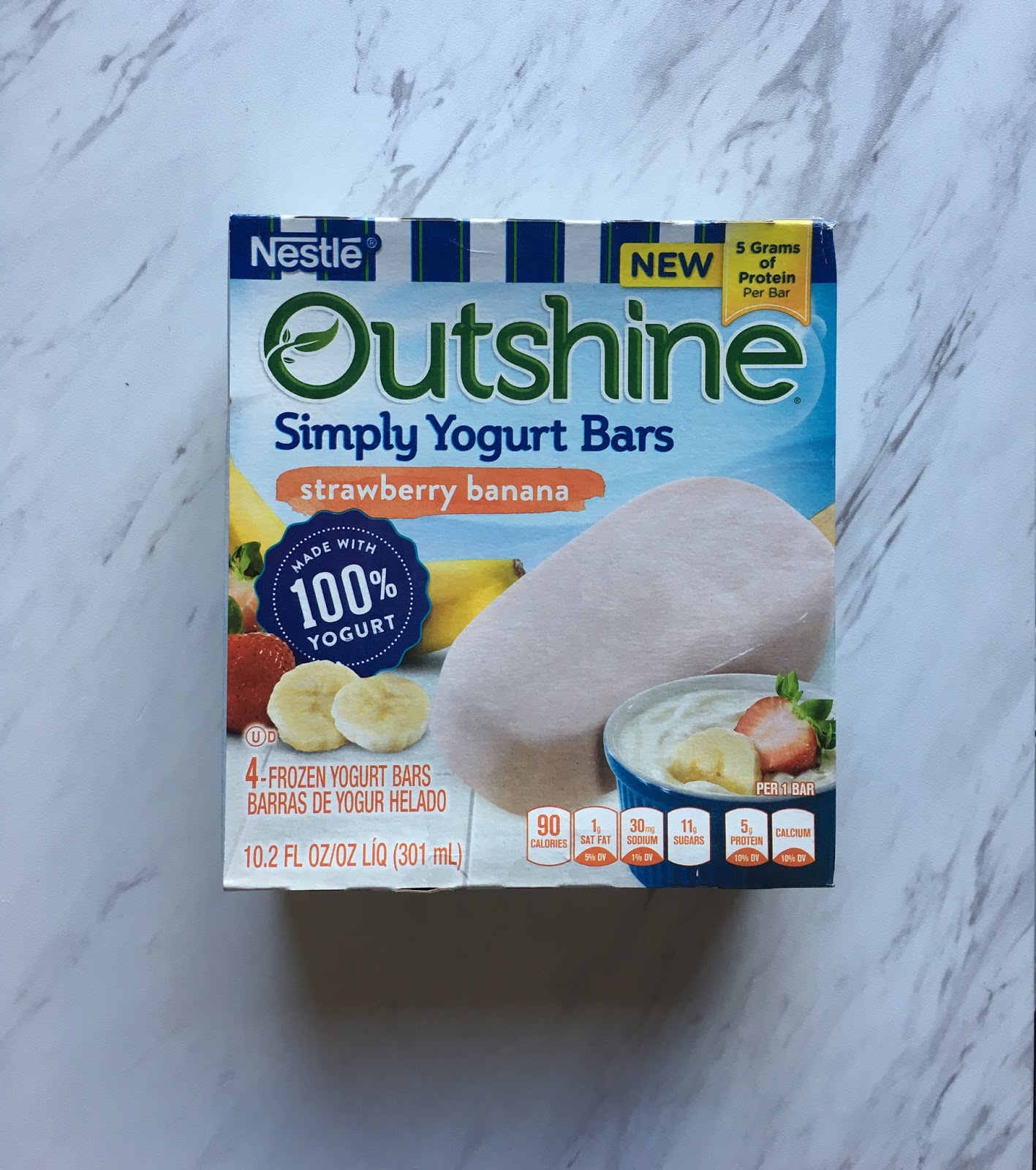 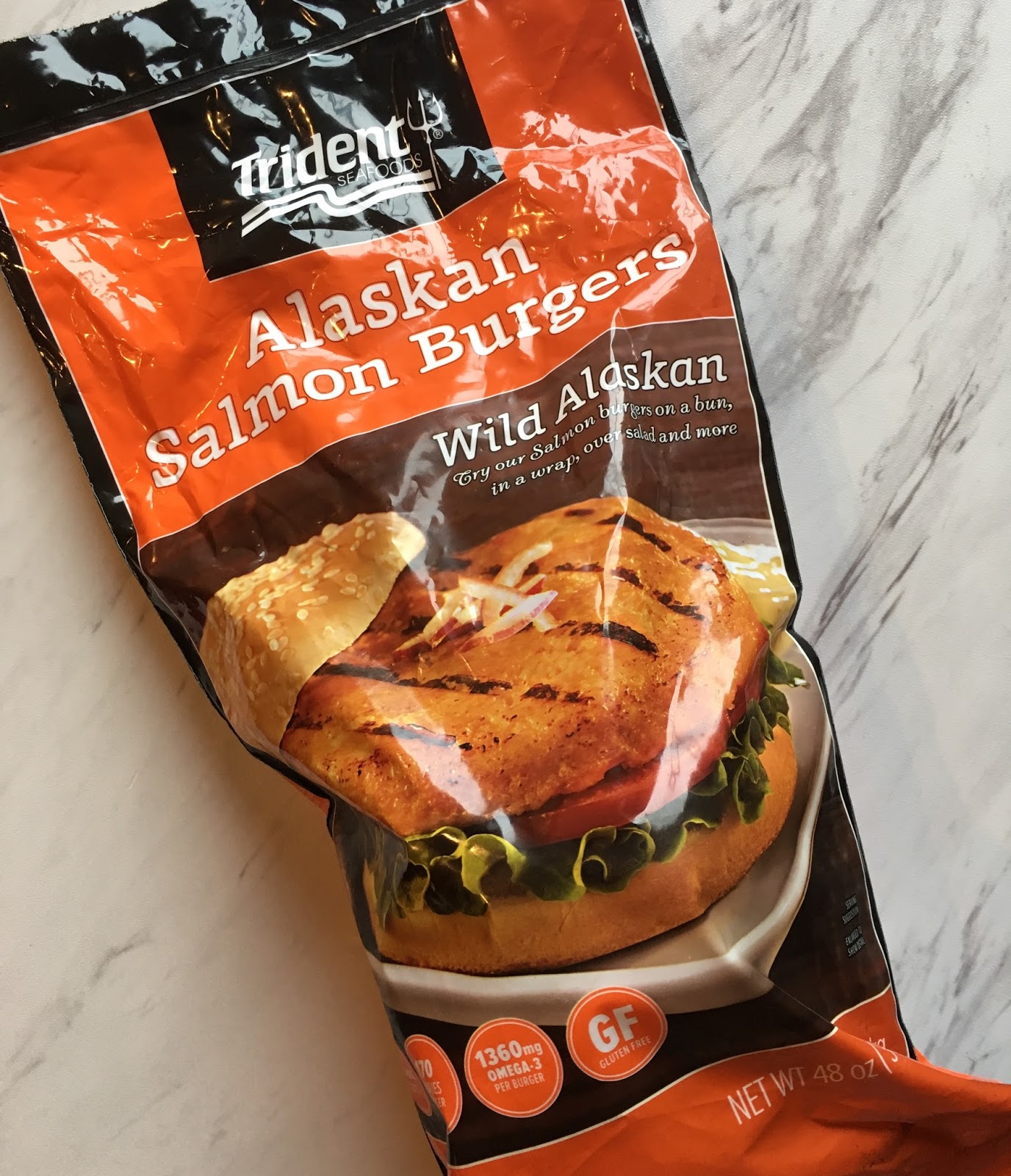 These are the salmon patty’s we use for Noelia and ourselves. We get them at Costco. 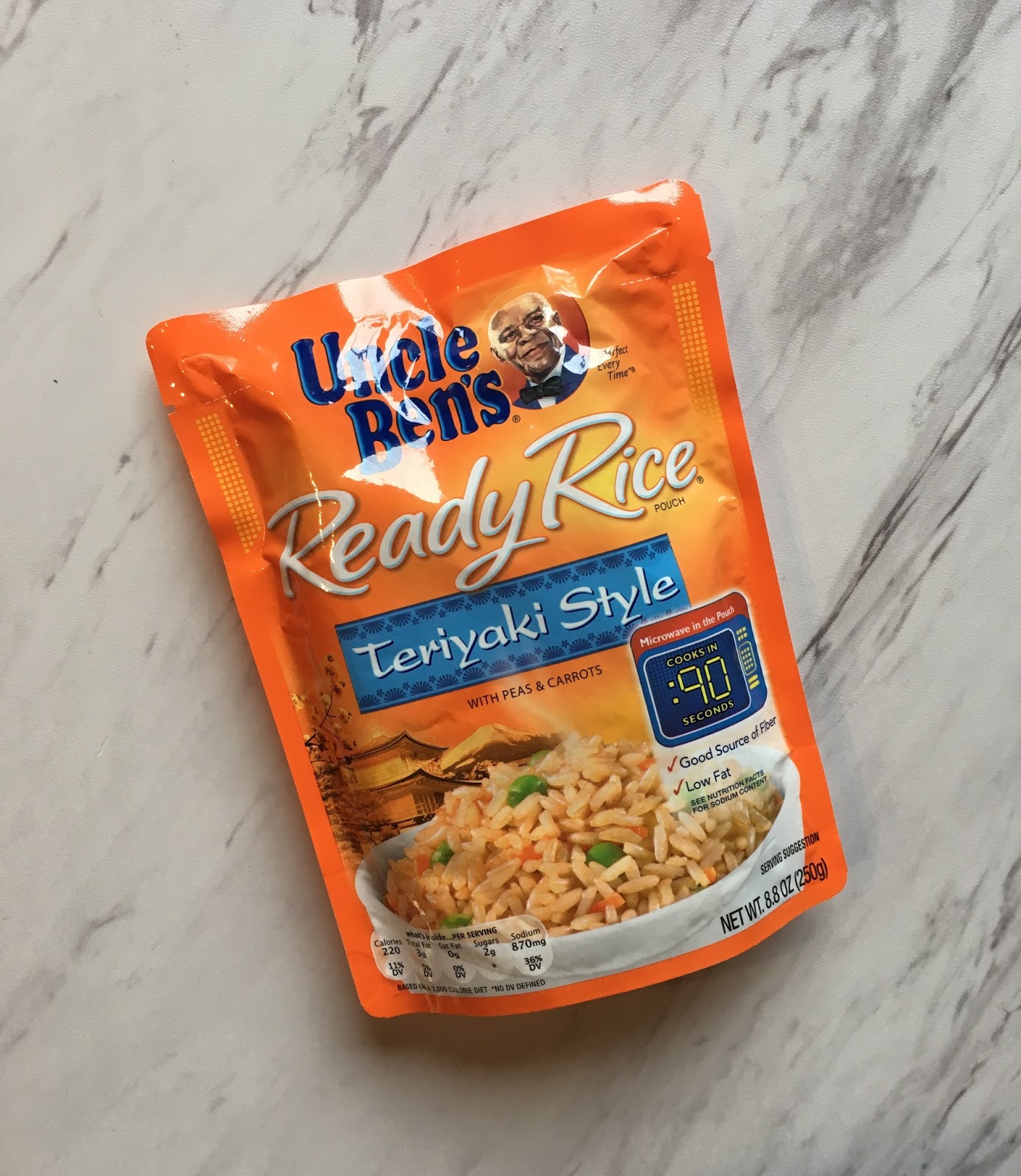 These rice packs are super quick and easy and she loves most of the flavors they offer.

These are all snack/food items that Noelia loves. She goes through her phases where she loves certain foods but she will get burnt out on them. So, I guess you could say this is our current “phase”! The cinnamon bread is great for meals like you have seen above but sometimes she will ask for a piece for just a snack. The graham crackers, fruit strips, and Gerber packs are great for on the go. We have also done goldfish crackers, craisins, and Gerber cheddar puffs—these are a few of the things she will not touch anymore so we have stopped buying them for a while until she asks for them again. 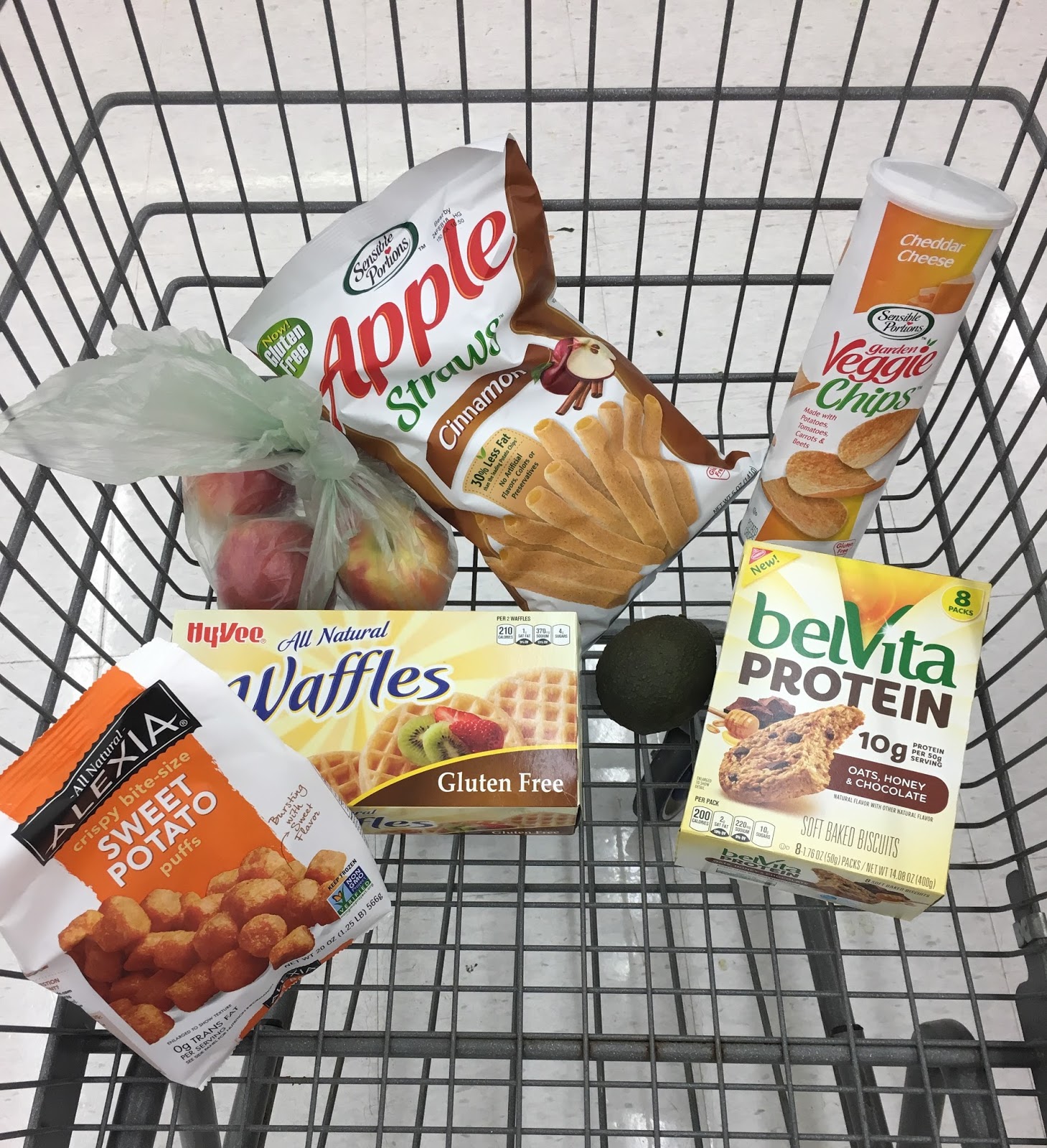 A quick snapshot of my grocery cart haul…I mentioned in my previous grocery haul post that I often do a quick Hy-Vee run on my lunch breaks during the week and grab a few things we are out of. It’s funny because every time I stop and take a picture I realize it is all carbs. 😉 HA! I promise we eat our protein, too! Here we have a lot of Noelia’s other snack foods (and ours too, hehe). The only thing in this picture Noelia has never liked is avocado. I have tried and tried but she just will not take to it. Avocado is SO good for you; it contains monounsaturated fat and is nutrient dense. I never liked it when I was younger either so I am hoping she will take to it as she gets older. She loves the sweet potato tots with her dinner meals and I love how fast and easy they are to make. Same with the waffles; just pop one in the toaster and we are good to go!

Hubby and I are all about eating good, wholesome foods but also about making life easy, too. If something just requires a quick microwave minute or minute in the toaster it is golden in our house, especially when you have a little one who is constantly pulling at your leg or wanting to “help” cook by sitting on the counter. It makes making dinner super hard or any meal really when she just won’t leave you alone (but I wouldn’t have it any other way!).  If you can make life easy there is nothing wrong with that in my book. I will never lie and say we are the “cook from scratch” family for every meal and we make/eat organic this or that—it is just not practical! Especially now since we are in full football season mode with Brody being a coach… where my coaches wives at?! He is never home for dinner so I have to wing it with a toddler on my hip…then shovel in food myself because by the time she is done she is back to being on my hip, ha! I swear Mom’s get 2.5 minutes of a break.

Also, please know that Noelia does not always eat what we give her. We have our fits/screams/food throwing days where she just wants a pop-sickle and refuses to eat anything else. I would be lying if I said I didn’t cave. I get those thoughts in the back of my head, “well she needs to eat something, so this is okay” but I really shouldn’t. Brody is definitely the stern one in almost everything and I am the pushover. You would think it would be the other way ;).

I will be doing more of these posts in the future as Noelia gets into new foods/snacks and just grows up in general (I hate saying that!). Hopefully by then her milk taste buds will blossom but I doubt it, lol. Feel free to shoot me a message or comment below if you guys have any questions about the food/meals I have posted. Like I said above I will be doing a post on carbs and why they get such a bad rap soon. Be on the lookout for that one, it’s going to be good!

You may also enjoy:

Hi, Loves! Welcome to my corner of the web! I am a proud Wifey to my college sweetheart & Mama to two gorgeous little girls. We reside in the Midwest with our fur baby, Bernard. I am a fashion & fitness enthusiast who loves adding a bit of glam to the everyday. I hope by visiting Vida Noel you are inspired today!
X0

Please connect your site to YouTube via this page before using this widget.